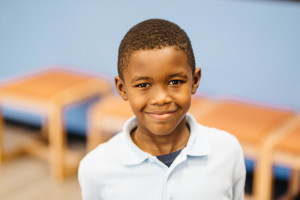 Maurecio is in the 4th grade at Alcy Elementary and has been attending the MAM Grizzlies Center for two years.  Maurecio really likes reading and one of his favorite books is Paw Patrol.  His favorite subject in school is math because “we count and get in groups and learn about math.”  These groups are similar to the teams Maurecio is used to at MAM, which he really enjoys.  He describes teamwork as: “if one of our teammates gets hurt we can help them.”

While at MAM, Maurecio enjoys “playing basketball, playing with friends and good sportsmanship.”  Coach London teaches Maurecio a lot in Bible study.  “We learned about – I think his name was Jacob – and how he dressed as his brother (or maybe it was his brother that dressed as him) and his dad blessed him because his dad felt fur,” he described the story of Jacob and Essau as best he could.  He then proudly recited John 3:16 and explained the importance of God sending Jesus to die on a cross for us because “we were going down and without Jesus we’d be dead.”

When Maurecio grows up he wants to be “a professional football player and help his teammates.”  In describing how to help his teammates, Maurecio said, “if one gets hurt, we’ll take ‘em to the coach, call an ambulance, and get help for them.”

When people ask Maurecio what MAM is, he said he tells them “they can come to MAM, have fun, talk to God, learn to be helpful, learn teamwork, and learn respect to adults and students.”  We are so thankful for Maurecio and his big heart!

One lucky person has the chance to win up to $10,0

Support MAM Summer Academy with a gift of at least

We're still seeking a few part-time teachers to wo

This summer MAM is hosting the Inaugural Helicopte