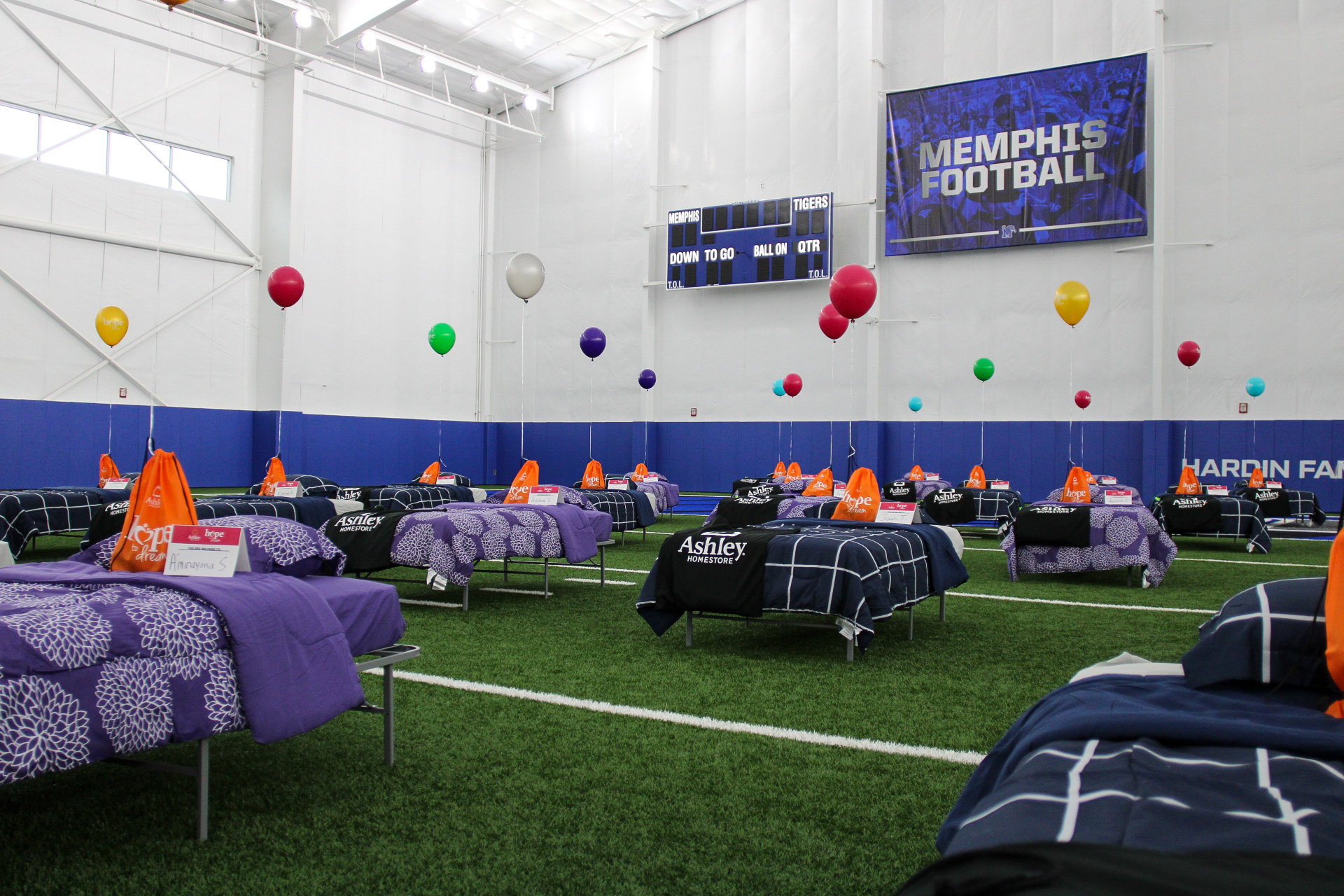 For about 50 or so kids, July 17 will be a day they’ll remember for some time thanks to the University of Memphis football team.

It was part inspiration, part sports, and part surprise. The children, all from the Memphis area, had the opportunity to participate in a mini-camp with Tigers football players.

The kids listened to running backs coach Anthony Jones give a quick speech — and then they got to their beds.

The Tigers, Youth Villages and Memphis Athletic Ministries were partners in Ashley HomeStore’s Hope to Dream program Saturday, a special event for children in need.

Once Jones was finished and the beds, hidden behind a black curtain, were unveiled, the children were joyous as they began searching for their beds, blankets and pillows.

For Jones and the Tigers players, that moment meant the world to them.

“Being a native Memphian, being from the Westwood community, I’ve had friends that have grown up without beds. Growing up, you get a chance to see what it’s really like and we’ve been very fortunate and blessed to provide that. Hopefully no child goes without a bed,” Jones said.

Jones and new special teams coordinator, Charles Bankins, were among the staff members at the Billy J. Murphy Athletic Complex on Saturday.

Head coach Ryan Silverfield wasn’t present, but played a role in setting up the event.

“Coach Silverfield has a heart for this community. He thought it would be a great idea to come out and be a part of this,” Jones said.

About two dozen or so players came to participate, from team leaders like Jacobi Francis, Thomas Pickens and Calvin Austin III, to freshmen like Andrew Jones and Greg Rubin.

“I think it’s huge for the kids. Whether they know it or not, they serve as role models for these communities. The city knows them from the football field, but not from the human side,” Jones said. “I think it was important for them to get out of bed and come here and be a part of it.”

As much as the children loved their new beds, interacting with the team seemed to be the highlight of their day.

“It was very great, I had a great experience seeing these players and I’m looking forward to watching their games,” 12-year-old Elton Hernandez said. “I felt good, I see players in the NFL and I see their future, I really wish them the best.”

He and the other children spent plenty of time playing catch and running routes with the Tigers. There was even a little smack talk involved.

For Austin, another native Memphian, there was no way he was going to miss out on the chance to give back.

“I still remember doing it my freshman year when it was at the Liberty Bowl. I just remember how much the kids had fun, so I wouldn’t pass up on an opportunity like this,” he said. “The kids were excited about their beds, but most of them said their favorite part was interacting with us. That really made our day.”

In a sense, the event was somewhat bittersweet for Austin. Knowing the city like he does, he understands that there a lot more kids around who need things like beds and pillows.

He and Jones are hopeful there will be a future where these types of events are needed less and less.

“It’s special, but it’s also kind of heartbreaking just to see their reactions to things we take for simple necessities like a bed. To see their excitement for that, it makes you want to go out and help more kids. To be able to provide them a bed and see them be head over heels for that, it was a great thing for us to do,” Austin said.

It’s important to note that this wasn’t a one-way street. For some of the players, playing around with the kids could help them in the near future.

“For freshmen coming in, I think it was special for them. I can remember coming in and sometimes if you’re not a big-name freshman or just a guy trying to find a spot on your roster, an event like this helps it feel like more of a family,” Austin said. “The kids don’t know you from Odell Beckham, they don’t care. They think you guys are all in the same boat, same category.

“Just seeing them have so much fun with us even when we’re doing a simple drill where they just have to run and tackle a dummy. They were going crazy, they were like they never got a chance to do that before. You realize that you may not think you can have an impact, but you really can have an impact, no matter where you are or who you are.”