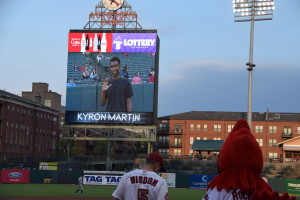 The August 10 Redbirds game against the Omaha Storm Chasers was a first for many of us. It was the first time for Memphis Suit Project to be featured as the Lipscomb & Pitts Nonprofit of the Game. It was also the first baseball game that Kyron Martin, a junior at Hamilton High School and a student recipient from Memphis Athletic Ministries, ever attended a baseball game.

And to keep with the trend of “firsts,” Kyron was given the honor to throw out the first pitch of the game!